The Victory of Prophetism 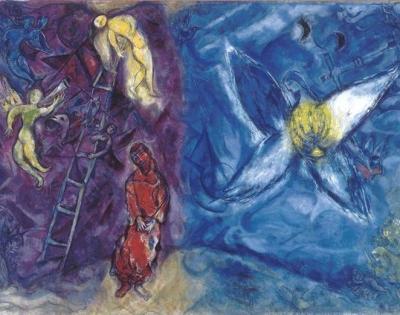 The Victory of Prophetism. "You fought against men and God, and you won, therefore your name is no longer a mere blood tie but rather attests to the Spirit of Freedom, the Magic of freedom, as well as to the Son - Father - Mother of the whole universe. - Picture: Marc Chagall: Jacob’s dream (1960-1966). The painting can be divided into two parts, on the left, Jacob dreams of a ladder with descending angels, a symbol of Divine Providence; conversely, on the right, it is possible to see the Angel bearer of LIGHT. The synergy with the "Doppelgänger" supports the poor in spirit who are tired of fighting a winning match against the powerful, ... a communion with the Light, which ensures victory... «Jacob left Beersheba and set out for Harran. When he reached a certain place, he stopped for the night because the sun had set. Taking one of the stones there, he put it under his head and lay down to sleep. He had a dream in which he saw a stairway rest

The Victory of Prophetism – The presence of the Great Light

It was actually fashioned like the work of a shaman, who uses wood to manufacture his amulet, his winning and living sword; the magic "Pinocchio."

Similarly, the magic and powerful wand of Moses and Aaron was made;
namely, we forge and create things starting from our thoughts and hands, using invisible hands, our shield and spear of sovereign power.

This culminates with the creation, as shamans do, with "wood and clay" of a new creature, a renovated modern prophet, a creature of light, the "Mask", a synergy with your "Doppelgänger", a winning match against the powerful: this is the power of thoughts and words through the network, and is the winning match against the "Powerful" and the "Rulers", it is a banquet of love together with "the Poor" of the whole world, thus supporting the soul of the “poor in spirit" now tired of fighting.

Thus this leads to the "magic moment of struggle", and communion between my Light and your Light, to make the world really friendly and kind, to be able to revive to the sound - touch of its powerful Word and blessing.

"You fought against men and God, and you won, therefore your name is no longer a mere  blood tie but rather attests to the Spirit of Freedom, the Magic of freedom, as well as to the Son - Father - Mother of the whole universe."

And now, with the same motivation of the sorcerer-nomad-animist, we are shaping our sacred weapon: we are creating the "Presence of the Great Light."

A blessing for the friends and a Curse for the enemies, with the purpose of dethroning the arrogant and exalting the humble, in order to bring joy and happiness around us and to all those persons, which is the same thing.

Who, during his/her studies, has a passive approach and nods without any doubt or reply, will soon fall asleep; conversely, those interested in the things and persons in question (including their own children) will follow the problem along unknown tracks, thus becoming adults able to distinguish friends from enemies and identify the path leading to good and right things.

"... The relationship naturally existing between one thing

and its opposite is extraordinary! They do not live together

inside men, but those who chase and grasp one thing

must, somehow, learn its opposite as well, as if the two things, albeit separate, 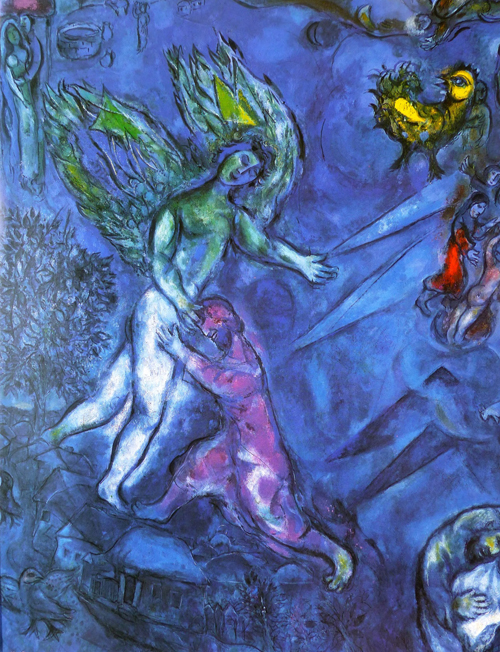 So Jacob was left alone, and a man wrestled with him till daybreak. When the man saw that he could not overpower him, he touched the socket of Jacob’s hip so that his hip was wrenched as he wrestled with the man. Then the man said, “Let me go, for it is daybreak.” But Jacob replied, “I will not let you go unless you bless me.” The man asked him, “What is your name?” “Jacob,” he answered. Then the man said, “Your name will no longer be Jacob, because you have struggled with God and with humans and have overcome.” (Genesis 32:24-31)

According to the Bible, if you know the name of a person, you can automatically comprehend his/her deeper soul, since "name" reveals his/her secrets and fate.