The Meritocracy - The Failure of Democracy 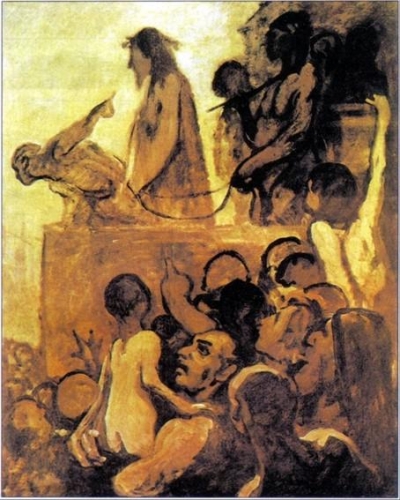 Picture: "We want Barabbas" a 1850 work by Honorè Daumier. In the background, at the top, Pontius Pilate asks the crowd who should be set free: Christ or Barabbas, a robber. The monochrome painting uses colours almost shapeless to represent the gullible crowd which believes in every statement, since it has no conscience. The close-up shows a father who holds his son: he is looking vicious and is urging his son to make the same decision: "Give us Barabbas!" Therefore the controlled crowd is, in turn, controlling the most naive and weak persons. At the top, Pilate (who embodies power) points at Christ with the purpose of influencing the decision of the crowd; actually, the ignorant masses can be easily excited.

Democracy has failed, we cannot ignore this fact; we have gone through various types of governments: aristocracy, kingdom, democratic city-states and now the whole world is exalting the idea of democracy.

However, democracy has never solved any problem, but rather has introduced new ones.

Precisely in the light of these problems, Karl Marx assumed the dictatorship of the proletariat.

I do not support this idea, since my own assumption goes far beyond democracy.

Democracy means "a government coming from the people, promoted by the people, intended for the people." But these are just words!!

They must choose a delegate. The population does not rule, but chooses a ruler.

What are the criteria underlying this choice? How do they choose their representatives?

And, above all, how do they choose the right ruler?

Have you ever been taught democracy?

No, not at all. Ignorant masses can be easily controlled.

For example, Nixon was defeated by Kennedy simply because the latter was more “telegenic” according to a study carried out by some psychoanalysts.

Based on these conclusions, Nixon improved his appearance before the following elections: he learnt how to stand, walk, talk, dress properly and this is what all the politicians do all over the world!

On television, even the colour of one’s dress is important, Clinton and the winner Trump knew it well: if they had worn a white dress, they would have looked like a ghost and failed.

Arbitrary reasons ... this is the way of politics, some politicians are skilful speakers ... but this does not mean that they will be good presidents.

A talented shoemaker must be perforce a good president, must he not?

This happened when Abraham Lincoln was elected president. When he delivered his first speech in the Senate, everybody was vexed, because Lincoln's father was a shoemaker, and the son of a shoemaker had defeated the greatest aristocrats, who were offended.

One of the most arrogant aristocrats was very annoyed and, before Lincoln took the floor, interrupted the president and said: "Wait a minute, do you know me? You sometimes came to me, because your father made shoes for my family. And you used to help him ..."

The whole Senate burst out laughing ... he was trying to humiliate Lincoln.

But it was not easy to humiliate a man like A. Lincoln, who answered: "I would like to thank you for having reminded me of my father, who died some time ago, in this context. My father was the best shoemaker in the whole country, and I know that I will never be as skilful as a president as he was as a shoemaker. He still outclasses me!." He was really a great president.

Therefore, I believe that the age of democracy is over.

We need a new merit system.

There are thousands of universities worldwide. Why should we grant illiterate and ignorant masses the power to choose the persons entitled to a great power for five years?

Nowadays this power is immeasurable and may destroy the whole world.

Within a merit system, only the practised and experienced people can take part in the elections.

For example, teachers and professors should choose the Minister of Education.

Thus, this would be the best possible choice!

The Minister of Economy and Finance should be expert in the market economy mechanisms, and there are thousands of candidates!

This rule should be applied to all the offices: only the experts in each field should choose their representatives.

In this case, the best talents would be selected.

This is what we call "meritocracy."

These persons would then elect the President of the Republic and the Prime Minister.

Thus, the most brilliant representatives of a Country would choose President of the Republic and the Prime Minister among the ordinary citizens or the members of Parliament.

Even in case of elections, some rankings should be established.

The persons entitled to choose the members of Parliament (or the Senate) should at least hold a degree.

This would help establish an educated, refined and experienced government.

However, before electing a world government, each Country should introduce the merit system.

And once we have benefited from the resulting advantages, we will realise that a single world government is the only solution able to grant joy and love of life, something that we must not give up, but rather pursue as hard as possible.

So far, everything has been causal.

Our history is full of "accidental facts!"

We must stop it.

Now we must decide and be aware that future cannot depend any longer on fate.

We are the creators of our own destiny; this would be the greatest possible creation.